From Austria to Persia 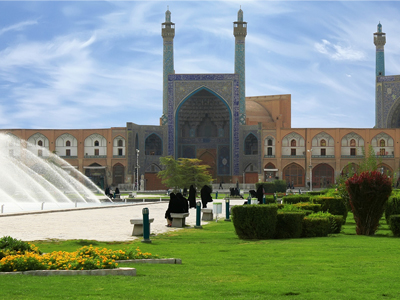 Arrival at Shahid Beheshti international airport, Isfahan. Received and transferred to hotel by Shokouh Iranian senior agent. Morning after breakfast, Capture the marvels of Safavid dynasty, all in a single square, Naghsh-e-Jahan square, the second biggest square around the world. Once used as a polo field, Naghsh-e-Jahan square is now a lively traditional bazaar. Marvel at Ali Qapu palace with its unique features and mesmerizing view of the square from the top. Soak up Islamic architecture in magnificent imam mosque on one side and small but impressive sheikh Lotfollah mosque on the other side of the square. Sip some tea and indulge yourself in an ethnic dish in a memorable place. Stroll in splendid Chehel Sotoun palace with the gardens surrounding it.

Delight in the magnificent Atigh Mosque, which is considered a museum of a thousand years of Persian Islamic architecture and is truly one of the world’s greatest mosques. At noon, blend in with a local family and thrill your taste buds with this exclusive program.

For today’s lunch you will be presented how to cook an Iranian cuisine. Then you will have the Persian lunch you have cooked. Taste Isfahani food at the cooking class hosted by a local family.

In the afternoon, take a walk in cobbled streets of Jolfa, Armenian district and capture the allures of Vank cathedral with the breathtaking paintings on its wall and dome.  Take a walking or bike riding tour on the Zayanderood river side packed with parks. On your way, catch a glimpse of Khajoo bridge– the finest, Si-o-se pol bridge– the longest, and Shahrestan bridge– the oldest of all.

Head off to Varzaneh and After a 2-hour drive from Isfahan, plunge into Varzaneh Desert, one of the most accessible deserts in the world. Check out the combination of wilderness and civilization sitting right next to each other. Unique to Varzaneh, are the local women’s costumes. While women in the rest of Iran wear black chadors, they wear completely white ones. Get entertained by warm locals in traditional houses. Head off to Yazd, the living museum of Iran, and check into a cozy traditional guest house. Delight in the shimmering sands of Varzaneh desert and let the greatness of the desert blow your mind. After a traditional lunch in the village, head off to Yazd, the living museum of Iran.

First thing in the morning, drop by at a Zoroastrian temple where a sacred fire has been kept burning for hundreds of years. Discover the mud-brick mazes and buildings staying cool in scorching hot summers with windcatchers, the very first air conditioning systems ever. Get captivated by the Tower of Silence, a structure previously used for excarnation, with a short distance from the city. Also, visit the Friday Mosque (1324 A.D.) with the highest portal and minarets in Iran, with a walk through the old Fahadan quarter. Unearth the silk weaving workshop where exquisite brocades are still made on traditional looms.

Drive to Shiraz. En route,  tread in the simple but impressive site of Pasargadae, tomb of Cyrus the Great” the Founder of the Persian Empire” and remains of his several palaces. Stop by the Persepolis, the glamorous capital of ancient Persia. Treat your eyes to the dazzling rock reliefs of  Naghsh-e-Rostam. Discover Ka’be Zardosht, the center of astronomy and religion in old Iran. Arrival to Shiraz.

Capture the colorful beauty of Nasir-ol-Molk Mosque, where the rays of sunlight crossing through the windows fills the interior with kaleidoscopic colors. Delight in Narenjestan-e-Qavam, an elaborate mansion built in the middle of sour orange trees. This garden house dates back to Qajar dynasty and is one of the most fascinating gardens of Shiraz. Get mesmerized in the tombs of widely known Persian poets, Hafez or Sa’di. Take a tour to awe-inspiring Vakil complex. Overnight stay in Shiraz.

Early morning , Fly to Tehran. Treat your eyes to a collection of Iran’s priceless items in National Museum of Iran. Capture the greatness and dignity of Golestan palace, a royal palace dating back to Qajar dynasty. Hit upon the splendid priceless jewelry treasury of Iran and see one the most renowned gemstones and shah crowns around the world.

Drive to Imam Khomeini international airport to catch your flight back with a handful of fond memories from the land of marvels.