Weekend in Half the World（Iran） 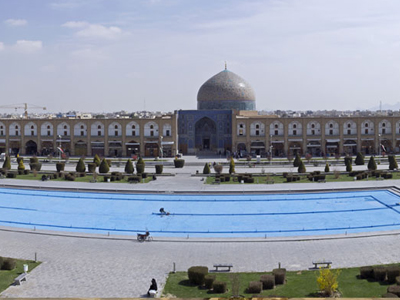 See how people have redefined hospitality and warmth. Browse around Esfahan province, the province of historical gems. Get astounded by turquoise domes, elaborate bridges, and cobbled streets of Esfahan. Explore awe-inspiring water structures in Ardestan. Laze around in traditional houses and get a breath of fresh air in gardens in Kashan. Catch the beauty of red mud-brick houses in the heart of mountains and be welcomed by the most hospitable people with the most colorful costumes in Abyaneh.

Departure from Vienna at 20:45

Arrival at Esfahan International Airport at 3:55.

Capture the marvels of Safavid dynasty, all in a single square, Naghsh- e-Jahan square, the second biggest square around the world and a UNESCO Site. Once used as a polo field, Naghsh- e- Jahan square is now a lively traditional bazaar. Marvel at Ali Qapu palace with its unique features and mesmerizing view of the square from the top. Soak up Islamic architecture in magnificent Imam Mosque on one side and small but impressive sheikh Lotfollah Mosque on the other side of the square. Browse the traditional bazaar to see unique works of art by artisans and smell Iranian spices that blow your mind. Sip some tea and indulge yourself in an ethnic dish in a memorable place. Stroll in splendid Chehel Sotoun palace with the gardens surrounding it. Overnight stay in Esfahan.

After about a one-hour drive, plunge into Varzaneh Desert, one of the most accessible deserts in Iran. Mark the combination of wilderness and civilization sitting right next to each other. Unique to Varzaneh, are the local women’s costumes. While women in the rest of Iran wear black chadors, they wear completely white ones. Get entertained by warm locals in traditional houses. Head off to Kashan. En route, visit Ardestan with a 2-floor qanat which was built 800 years ago and water currents flow in two different floors. It is called Moon Qanat and is the only 2-floor qanat around the world. Despite shortage of water in the area and lack of rain, this qanat has preserved water and saved the city from draught. You can also see how people have divided water through various canals for garden irrigations. Besides, Ardestan Friday Mosque will also blow your mind by its old structure, 4 porches, and 2 stories. Continue your journey toward Kashan. Arrival to Kashan, a merchant town known for its high quality ceramics, silk, carpets, and fine houses. Overnight stay in Kashan.

Tread in Fin Garden, the epitome of Persian gardens including pavilion, turquoise pools, a Hammam complex, and the modest Kashani national museum. Catch a glimpse of elaborate Borujerdi mansion, built in the 1840s for the affluent Tabatabaei family containing features such as a biruni (where visitors and guests are entertained) and an andaruni (the private part only open to family members). Afterwards, drive to Abyaneh– the living anthropological museum with its red mud bricks- and wonder how the man has adjusted to the environment. Drive to Esfahan. Overnight Esfahan.

Delight in the glamorous Atigh Mosque, which is considered a museum of a thousand years of Persian Islamic architecture and is truly one of the world’s greatest mosques. After that, head to the Music Museum of Esfahan, home to Iranian musical instruments. Treat your ears to live performance of traditional music of Iran by highly acclaimed and world class musicians and artists. After having a fantastic experience in listening to soothing and ear catching music, have a delicious Iranian lunch at the museum while traditional music is played. After lunch, take a walk in cobbled streets of Jolfa, Armenian district and capture the allures of Vank cathedral with the breathtaking paintings on its wall and dome. In the evening, take a walking or bike riding tour on the Zayanderood river side packed with parks. On your way, catch a glimpse of Khajoo bridge– the finest, Si-o-se pol bridge- the longest, and Shahrestan bridge- the oldest of all. Overnight stay in Esfahan.

Transfer to Shahid Beheshti airport and catch your flight back to Vienna.